So I got an interesting rescue about a month and a half ago. I got a call that the rescue got in a Veiled chameleon that was found here in Colorado in a tree at 9,500 feet elevation. Two hikers saw it up a tree and climbed up it and got him down. They said it looked like it had wax on it's casque (head/helmet) and that it could not use it's tongue. It was also found with a neon band around it's neck where it looked like it had been tied to a tree and broke loose. I went to pick him up the next day and imagine my surprise when I see it is not a Veiled chameleon but a HUGE male Oustalet's chameleon! To be honest I didn't know what kind of chameleon it was but I knew it was definetly not a Veiled! I went and looked through a chameleon book and found out he was an Oustalet's chameleon as soon as I left. I also did some research on the net and turns out these are the world's longest chameleon species and can get over 2 ft long.

I took him to my vet and we both decided it looked like he had a burn on his head probably from a heat lamp. Other than that his overall condition was good and he was very heavy weighing in at exactly one pound! He is also just over 2 ft long! He could not have been out in the wild for very long or he would have died. Here it gets very cold at night and the humidity can get very low, 20%. These chameleons come from Madagascar where it is warm and the humidity is high, at least 70%. He was put on antibiotics and silver sulfa ointment for the burn. Everything seemed to be going great with this guy, whom my kids named Rex:) He was eating and drinking and looking better every day. He regained the use of his tongue and things appeared to be fine.
During this time I decided to do some research on Oustalet's chameleons because I noticed that Rex looked very different than all the pictures I saw of male Oustalet's chameleons, mostly it was his color. I decided since he was so beautiful I should breed him (once recovered) so his genetics would not be lost after he died. I found a website that discussed Oustalet's as having color locales/morphs. I was trying to figure out which one Rex was so that I could find a suitible female for him from the same locale giving me better odds of reproducing babies that looked like him. I thought I had a good idea he might be an Ambanja locale based solely on his color so to be sure I contacted the author of the site who studies these chameleons in Madagascar. He looked at the pic I sent him and told me he was not from Ambanja and the reason was not just because of color, it was because of his casque. He said Ambanja locales have a more rounded casque than all other Oustalet's chameleons and that the area around the eye is always black and right around the tip of the eye lids are yellow. He sent me a pic high lighting the differences. He also said that if a splitting taxonomist were to really study them that they would prob be declared a separate species. He also said that because of this the color locales should not be mixed. The other locales also have physical differences to them besides just color. Oustalet's from the south west are much larger than other locales especially ones from Morondava which he said would be worth keeping a captive colony of. He said he thinks Rex is probably from the Tulear region because the shape of his casque. Rex has a more pointed casque than some of the other locales. Then he explained my chances of finding a female from there are very slim and why. His quote: "I would estimate that there is about 90% chance that oustaleti imported are from the Antananarivo/Ambatolampy regionand less than 10% that the animals originate from the Tulear region. Very few animals come from Ambositra and even fewer from Ambanja. This is for commercial reasons. There are specialised oustaleti "hunters" in the Antananarivo/Ambatolampy regionwhere the species is common, even in the town center and in people's yards. Oustaleti from Antananarivo are the cheapest oustaleti an exporter can get and because importers overseas generally do not care what local of oustaleti they get and pay the sameprice no matter what locality, almost every oustaleti exporter is from the Antananarivo/Ambatolampy region. Exporters are also all based in Antananarivo so it is convenient to get animals from not to far away." Then he told me what I should do about breeding, his quote: " If I would live in a country other than Madagascar, I would buy several young animals from a single shipment as chances that there are more than one locality oustaleti in a single shipment are slim. In your case, I would either pair your male with an Antananarivo/Ambatolampyor Ambositra female (I think they are , although slightly different, the same phenotype). In the meanwhile , please spread the word that oustaleti "morphs" should not be mixed. If enough people ask, may be one day exporters here will care." Since talking to him through email and learning all of this I thought it was important that I share this info with everyone else who is interested in this species. The website for color locales/morphs is:http://www.adcham.com/html/taxonomy/oustaletimorphs.html
Since then I have searched for a suitable female for Rex and found a young (captive hatched) 11 month old. She seemed perfect for him so I bought her and she has been with me for 2 weeks now and doing great. At the time I bought her I also had to buy the male of the same age that came with her as they were being sold as a pair. They are both around a foot long and the female should be ready to breed soon so I am very excited.
This is Rex

This is the female I got for him:)

Posted by The Reptile Whisperer at 9:37 AM

The Reptile Whisperer
United States
I was born in Miami, Fl and started catching herps at the age of 5. That was about 25 years ago and I have been keeping, rescuing and breeding them ever since. All my pets are tame, which you can see in the videos on my YouTube channel. Some people say I have a way with animals as I haven't come across anything yet I couldn't tame down. (I have a lot of patience and I'm good at reading reptiles) For this my friends and family have nick named me "The Reptile Whisperer". I currently have 50+ herps, some of which came from the reptile rescue I used to work for. Most are tropical aboreal species (mainly lizards). My current breeding projects are Cuban Knight anoles, Tokay geckos, White lined geckos, Giant day geckos, Crested geckos, Veiled chameleons, Oustalet's chameleons, Green tree monitors and Blue tree monitors. Plans for the future is to become a Herpetologist:) 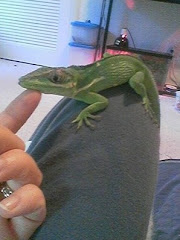 Izzy loves getting her chin rubbed:)